Tom is an instructor and Designated Pilot Examiner (DPE) in the Eclipse 500 and the Phenom 100 & 300. Tom began as an aeronautical engineer for Pratt & Whitney,  served as an A-10 combat and instructor pilot for your US Air Force. Tom then flew for Delta Air Lines becoming an instructor pilot and check airman in the B-737.

Tom started his VLJ experience as the director of training for Eclipse Aviation in 2006 and built the simulator program and In-Aircraft training program at Eclipse from scratch.  He hired all the original Eclipse instructors and mentors.  Tom has the distinguished honor of becoming the FIRST Eclipse 500 type rated pilot immediately after he first typed the FAA. Tom has acquired over 3000 hours in LJs and VLJ’s and has more experience training pilots to transition from a piston aircraft to a jet than anyone in the industry.

Through his experience and relationships with the FAA, Tom was selected as one of the first Eclipse 500 and Phenom 100/300 Designated Pilot Examiners (DPE) in the world.

Tom loves spending his free time with his wife Mary Beth, flying and testing the RV8 he built, and boating off the coast of Florida. 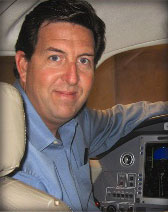